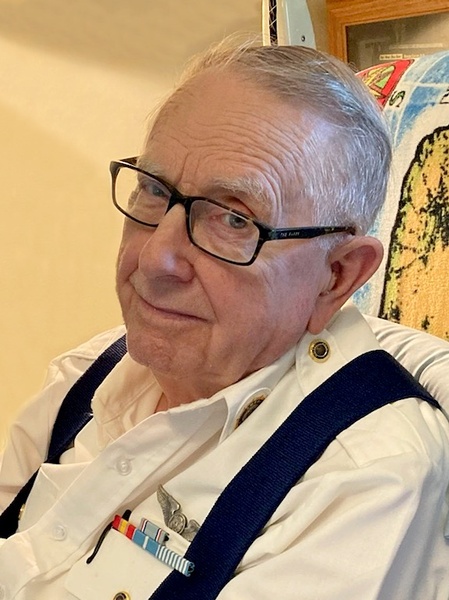 Gary Wayne was born on August 28, 1933, in Marengo, Iowa, the son of Leon Lloyd and Beulah Mae (Angell) Weideman. The family moved to Atlantic in 1942, where he attended Atlantic Community Schools until the middle of his junior year; later graduating from Exira High School in the Class of 1952. While still in high school, he enlisted in the Iowa Army National Guard and transferred to the United States Air Force following graduation to serve in the Korean War.

On July 2, 1956, he married Wilma Zahnd in Indianapolis, Indiana.  Since he was still in the service, Wilma joined him at McClellan Air Force Base in California. He served his country from 1952-1956.

In January of 1957, he started working for Aerojet General, a subdivision of NASA, in Sacramento, working on liquid rocket engines. Gary and Wilma eventually moved to Atlantic, Iowa in September of 1957. In April 1958, they were blessed with their daughter, Sandi. In 1960, they moved to Columbus, Indiana and Gary worked as an accountant at Arvin Industries and then Chrysler Motors. In July of 1960, they were blessed with their son, Dale.

He then obtained a job with Morris Plan Bank in Indianapolis as an auditor. They moved from Columbus to Whiteland in 1966 to be closer to his job. He later went into landscaping and irrigation working for several different companies. He obtained his Weather Matic certification in 1968. In addition, he briefly sold golf course turf supplies, apprenticed as a plumber, sold pole barns and became lumber department manager for Kmart.

After the death of his father in 1978, he moved back to Atlantic, Iowa, to care for his mother. During this time, he worked at Payless Cashway, Camblin Plumbing & Heating and Nelson Automotive. In 1982, they moved to Estes Park and Gary continued to work in the landscaping field at Chief’s Landscaping. He also stayed busy as a plumber obtaining his journeyman’s license and doing maintenance for several area churches. In 1990, they moved to Fort Collins, Colorado, where he worked at AAA Plumbing, retiring in 1997. In retirement they moved to Ogallala, Nebraska, and this was when he studied to become a Master Plumber.

Wilma passed away in April of 2000. In 2004, Gary moved back to Atlantic, Iowa. Gary married Janet Louise (Blakely) Watson on December 9, 2005, after meeting at the Roland Funeral Home Grief Support Group. Roland’s was a familiar place to him having worked there in high school and in recent years as funeral assistant for nearly 15 years.

Gary was a member of Griswold American Legion Post #508 and many churches, currently a member of Central Church of Christ in Griswold. He enjoyed “MANY” interests which included collecting books and traveling. Gary never knew a stranger; he loved to visit. He was always on the go, out and about! He and Janet enjoyed many country music festivals.

He is preceded in death by his parents, Leon and Beulah Weideman, wife, Wilma; and a sister in infancy, June Marie.

A private family burial, with military honors, will be held at a later date in the Atlantic Cemetery.

In lieu of flowers, memorials may be directed to the family for designation at a later date.

Roland Funeral Service is caring for Gary’s family and his arrangements. Condolences may be left at www.rolandfuneralservice.com.

To order memorial trees or send flowers to the family in memory of Gary Wayne Weideman, please visit our flower store.

The luncheon will be held immediately following the service.